An indirect free kick is awarded to the opposing team if a goalkeeper commits any of the following four offences:

The goalkeeper can keep possession of the ball for a total of four seconds:

“and” in the first point refers to the fact that if the goalkeeper has possession of the ball in their hands and drops it to their feet, the count continues and does not reset.

Here’s a video demonstrating the start of an early count for an unnecessary delay in the goalkeeper’s possession as he lies on the ground after receiving it. The extra time taken by the goalkeeper extends beyond the recoil time needed for the save and so, the goalkeeper could have in fact released the ball sooner without difficulty.

The count continues when the goalkeeper has the ball in their hands and then releases it to their feet. The following video demonstrates this.

The count is stopped when the goalkeeper crosses the halfway line. The count resets if the goalkeeper returns to his own half after entering the opposing half while in possession of the ball.

Plot twist: The goalkeeper passes the ball to a teammate in the opposing half after crossing over the halfway line (first touch). A return pass is then made to the goalkeeper still in the attacking half (second touch - but since the goal keeper is still in the opponents' half, there is no offence). The goalkeeper returns to the defending half while dribbling the ball for himself. The moment the ball is crossing the halfway line with the goal keeper in control, Second touch offence.

See next section for what we mean by second touch (multiple touches).

What do the Laws say exactly about 4 seconds?

An indirect free kick is awarded to the opposing team if a goalkeeper commits any of the following four offences:

One of the most complicated rules in Futsal is that the goalkeeper cannot touch the ball with their hands or feet for a second time (basically having already touched it) in their own half. The first touch can happen anywhere and includes taking restarts.

The second touch is permitted if and only if one of the following has happened:

Note the use of the word second and multiple touches is a colloquial reference an not an official Laws of the Game term. A second touch doesn’t mean a second dribble (i.e. poking the ball with the foot twice in succession) but rather the second time the goalkeeper has possession of the ball (someone else gets possession.

In the following video the goalkeeper plays a game of tika-taka with a defender and is penalised by a second touch offence.

In another scenario, we see that the goalkeeper wisely does not touch the ball in this encounter to avoid suffering a second touch offence. Shielding the ball would invoke the 4-second rule in the previous section. We assert that shielding is considered control of the ball.

A very important note is that if the goalkeeper plays the ball from a restart e.g. takes a goal clearance, kick-in or free kick, it constitutes a first touch. As a result, a return pass in his own half would be a second touch offence.

Allowing the ball to cross the halfway line no longer has any effect on allowing the goalkeeper to touch the ball again. That rule was altered in 2010. We refer to earlier in this post to at least one of the original two conditions that need to be met for the goalkeeper to be able to touch it again. An important thing to note is that a lot of concentration is required here. A team could potentially play a very drawn out game of passing having already included the goalkeeper in it and then include the goalkeeper again. No time span waives a second touch so what may feel like ages of a team passing the ball all across the court avoiding the ball going out of play and an opponent touching it could be a violation if the goalkeeper touches it for a second time in between then. These two major points are covered by the following video.

On the other hand, an opponent touch or ball out of play allows the goalkeeper to legally touch the ball again. Opponent touch

Ball out of Play

What do the Laws say exactly about multiple touches? An indirect free kick is awarded to the opposing team if a goalkeeper commits any of the following four offences: After playing the ball, he touches it again in his own half of the pitch after it has been deliberately played to him by a team-mate without an opponent playing or touching it … FLOTG 2014-2015, Page 40 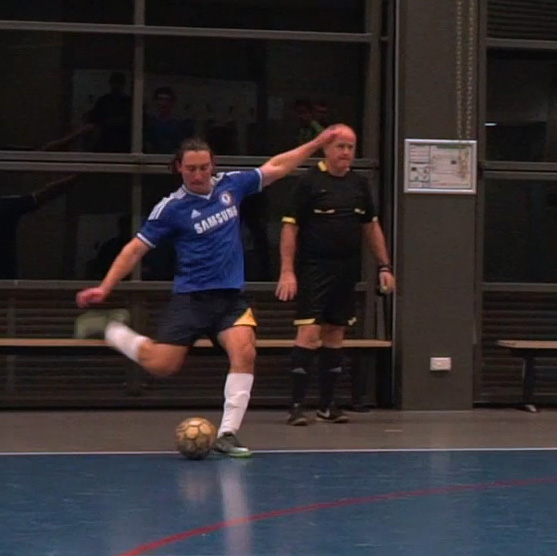